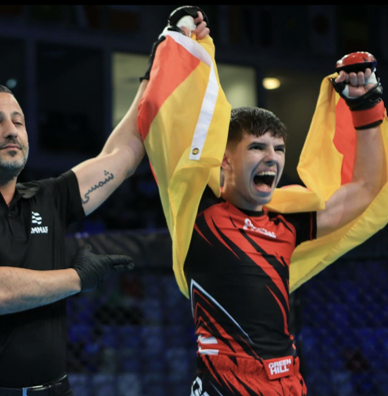 Kingsbridge Training Academy launched the first ever accredited Level 3 Award in Mixed Martial Arts (MMA) Coaching training package in Ireland. The course was aimed at delegates who were not fully trained coaches, who were interested in gaining a qualification in the thriving practice of Mixed Martial Arts (MMA). All delegates received an OCN Credit4Learning accreditation on successful completion of all three courses and assessment: Coaching Practice and principles, Safeguarding Children within Mixed Martial Arts and MMA Sports Trauma Course Essential First Aid for Coaches.

We interviewed one of the MMA rising stars, Jack Corr, on his educational journey through out attending the Level 3 Award in Mixed Martial Arts (MMA) Coaching Package. Here is what Jack had to say about this training experience at Kingsbridge Training Academy.

Q1. Tell me about yourself?

A1. I currently train and coach MMA within my club ZKJ. From 2017 to 2019, I worked for the Northern Ireland Youth forum working on a Youth programme which incorporated MMA funded by Comic Relief. Growing up I competed in Karate tournaments as well as under 18 MMA and freestyle wrestling competitions. I have fought in 3 World championships and 3 European championships in amateur MMA for Northern Ireland. I won a Bronze medal at the 2018 European championships in Bucharest. I am currently in my final year of University studying Business Economics with Marketing.

Q2. How did you come to know about Mixed Martial Arts as a sport?

A2. I always remember watching UFC fighters like Chuck Liddell and Randy Couture on the TV with my dad when I was probably 5 or 6. So it has always been something that I have been aware of growing up in a family heavily involved with martial arts.

Q3. How old were you when you started practicing Mixed Martial Arts?

A3. I started training in Karate Jutsu with my dad when I was 3 years old and am currently a 3rd dan black belt. I started freestyle wrestling when I was 11 with Dave Finlay Sr. In my teens was when I started to focus more on training and competing in MMA.

Q4. What element of Mixed Martial Arts do you prefer?

A4. I enjoy the striking side of MMA coming from a karate background but in terms of grappling I would prefer a wrestling style over BJJ.

Q5. Who is your favourite MMA advocate and why?

A5. Probably someone like Georges St-Pierre as he is a real martial artist who is not only really strong in all aspects of MMA but I think he’s a good role model as well because he always comes across respectful in the media.

Q6. How did you come to know about the Kingsbridge Training Academy Level 3 Award in Mixed Martial Arts (MMA) Package?

A6. I found out about the level 3 award in MMA from my club (ZKJ) and thought it would be very useful to have and to progress as a coach.

Q7. Which of the 3 modules: Coaching Practice and Principles, Safeguarding Children within Mixed Martial Arts or MMA Sports Trauma Course Essential First Aid for Coaches, did you prefer and why?

A7. I thought each of the 3 modules were very interesting and useful as an MMA coach but the one I enjoyed the most was the coaching practice and principles module. I just thought this module was the most practical and really made you think about your own coaching style and what would work best for you when coaching others.

Q8. What are your intentions after completing the Level 3 Award in Mixed Martial Arts (MMA) Package?

A8. After completing the level 3 award I want to take more responsibility within my own club and hopefully coach more classes and people.

Q9. Would you recommend Kingsbridge Training Academy as a premium training provider?

A9. I would recommend Kingsbridge; I thought the environment was relaxed and comfortable which made it easy to listen and learn.

A10. Yes, I thought the speakers where very knowledgeable in their fields, and all the material was relevant to any aspiring MMA coach.

The British Heart Foundation established February as UK Heart Month, and campaign each year to encourage cardiovascular health. The heart…

On Friday 5th November 2021, we celebrated our first Prostate Cancer Symposium at Crowne Plaza Shaw’s Bridge Belfast. It was…

World Restart a Heart Day is observed on the 16th October each year, and its aim is to raises awareness…